Hyponatremia refers to water intoxication. This is caused due to the loss of sodium and water during perspiration, which is only compensated by water alone resulting in low sodium content in the body. This is a growing concern in military training and common in athletes who drink water during high stamina physical activity.

Heat exhaustion can be easily confused with hyponatremia as the results and causes of occurrence are usually the same in both cases. Endurance trainers often suffer from confusion and faintness during strenuous physical exertion. However, most endurance trainers experience these events due to heat stroke, heat exhaustion or dehydration. 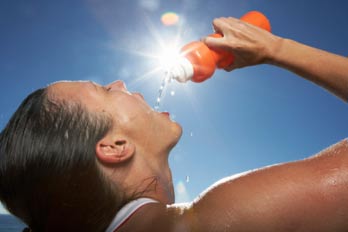 Excessive sweating, heat and poor rehydration can lead to conditions such as hyponatremia

In hot climates and during vigorous sports activities, it is difficult to recognize hyponatremia due to the crucial need for water. The major symptoms of dehydration, heat exhaustion and heat stroke seem pretty much similar to those of hyponatremia and are often caused due to hot weathers and exercise—just like in hyponatremia.

It is important that you are able to recognize the cause of the symptoms before you treat it. Make sure you are able to tell whether the casualty is suffering from hypnatremia, dehydration or any other heat related condition.

If the victim’s exhibiting severe symptoms such as severe or prolonged weakness, confusion, slurred speech, loss of consciousness or seizures, make sure emergency medical help is sought immediately, without worrying about what exactly caused these symptoms to arise. In emergency situations, it is crucial to act fast!

Dehydration and heat exhaustion are more common in athletes and labourers who work under the sun and symptoms may also look similar to those of hyponatremia. Heat stroke is a much more serious condition with a few distinct symptoms that make it easy to recognize such as:

If a casualty is suffering from a heatstroke, make sure treatment is prompt and emergency medical help is sought immediately.

Ask if the casualty has been well-hydrated during training. If the victim says that he has been drinking over a pint full of water during training, you can establish an idea that he may be suffering from hyponatremia. Quick and large water intake can also lead to hyponatremia.

Hyponatremia results due to the body lacking salt, therefore, victims require salt when suffering from the condition. If minor symptoms such as nausea are present or before major symptoms like dizziness, cramp or confusion kick in, casualties can be treated with the consumption of salty food. Take caution while treating victims with heat-related symptoms. Victims of dehydration should not be given salt as all they need is water—so make sure you are able to differentiate between the two conditions.

Avoid over-the-counter pain relievers such as aspirin, ibuprofen or naprosyn as they may aggravate the condition even more.